[Cebu Attractions] Oslu Whale Shark Village, a gentle creature that eats dried shrimps, turns out to be so close to whale sharks!

If you want to go to the islands to bask in the sun, but don't want to spend too much, the Philippines is a super good choice! After Boracay became popular, another wave of Cebu, Bohol, Palawan, El Nido, each island is so beautiful that you want to collect it! In addition to the beautiful beaches of Cebu and Bohol, the well-known Balicasa Great Fault dive site, the unique creature mini tarsier, there is also the world-class Oslob Whale Shark Village (Oslob), which is also where Wang Yangming identified Cai Shiyun as the soul A sweet place for couples is one of the must-visit attractions in Cebu! This article will introduce the one-day trip itinerary, transportation, cost, precautions, etc. of Oslo Whale Shark Village!

Cebu is the second largest city in the Philippines. There are many buildings left over from history, including the famous Magellan’s Cross and the Basilica of the Holy Child. There are many flights between Taiwan and Cebu. We chose to fly to Manila first, transfer to Cebu Airport on Mactan Island, play in downtown Cebu, and then take a boat to Bohol Island. If you only want to play Bohol Island, it is recommended to fly directly to Panglao Island, which can save a lot of traffic time. Because we wanted to see the city of Cebu, we took the car back and forth and took the boat. It was about afternoon when we arrived at Bohol Island on the first day.

The business hours for watching whale sharks are from 6 a.m. to 12 noon. The journey is very long, and you need to get up super early. I have heard of the following ways:

Most of the tourists pull cars directly from Cebu City to Oslu, the distance is about 130 kilometers, the journey is very difficult and long (it is not easy to see the whale shark itself). You can take a bus or a private chartered car, and take a car in the early morning and drive about 3.5 to 4 hours to reach Oslo. Some people will take a ride to Oslo the day before, live near the whale shark village, and watch the whale shark the next morning.

In theory, this is a smooth and time-consuming method, but the risk of taking a boat is higher. Sometimes flights are cancelled due to heavy storms, and you must be careful to board illegal and less safe boats. At that time, we lived on Panglao Island for four days and three nights. On the day we visited the Oslo Whale Shark Village, we got up early and took a human-powered boat from the pier and then transferred to a big boat to Oslo. After arriving in Oslo, take a tuk-tuk to Whale Shark Village. The entire journey will add up to about three hours.

After arriving at Whale Shark Village, since the tuk-tuk we bought was a round trip between Whale Shark Village and Oslu Port, the tuk-tuk driver would wait for us to finish snorkeling in Whale Shark Village and promised to help us look at our luggage. Since the bag did not carry too much money, and we were too embarrassed to refuse the driver’s enthusiasm, we handed over the bag to the driver. However, in a place where we are not familiar with our lives, out of the idea of protecting ourselves, we went into the water. Decided to take a few photos with the driver (I'm afraid that the driver will suddenly disappear ?). The tuk-tuk driver was very conscientious. After we got ashore after snorkeling, we saw him carrying three bags and waving to us vigorously. I think we were too worried. However, if you are really worried, there are also lockers on the side of the scene to lock your luggage, so you will feel more at ease.

The entrance ticket to Whale Shark Village is 100P, and there are three types of whale shark watching activities, including boat viewing (not in the water), snorkeling and scuba diving. The prices are 500P, 1000P, and 1500P respectively. Because whale sharks spend most of the time on the surface of the sea Swimming, and there are regulations in the park that the distance from the whale sharks should not be less than five meters, so we think that snorkeling to watch the whale sharks is very enough! Due to the large number of tourists, the whale shark watching activities are carried out in stages, each of which lasts about 30 minutes. After purchasing the ticket, you will get a number plate, then change into your swimsuit and life jacket, and wait for the number to be called in the park and you can board the boat to see it. Whale shark!

After taking the boat to the deeper waters, the staff will start to sprinkle bait to attract the whale sharks to approach, and then they can go into the water to swim with the whale sharks and take beautiful photos! There are not many places to see whale sharks in the world, so this small fishing village has become such a popular place! The whale shark, also known as the tofu shark or the big ham shark, is a gentle little behemoth. They are huge, and some can reach several stories high. They open their huge mouths when eating. Don't be scared by them at this time, because they are filter feeders that only eat plankton~

The moment I saw them was really super healing, all the fatigue of getting up early disappeared, and I was always excited to take photos with this huge creature! It is a pity that there are so many tourists on site, and whale sharks also swim around with the feeding staff. It is not easy to catch a good time to take pictures with him.

What should I bring on the day?

Just bring some on the daycash(Enough to buy tickets, tuk tuk to Oslo and lunch),Swimsuit,Swimming pants,Sunscreen,Waterproof cameraThat's it! If there isJellyfish suitGirls who are afraid of drying up can also bring it! It is not recommended to apply sunscreen before entering the water for fear of destroying the marine ecology and whale sharks. Girls who are really afraid of sun can choose ocean-friendly sunscreen. Allie had no makeup that day. In addition, due to Panglao Island to Oslo will Take the boat for about three hours, so if you are seasick, please take it before boarding the boatSeasickness medicineOh! It's even better to find a comfortable position and quickly put yourself to sleep after getting on the boat! Allie is a girl who is prone to seasickness. She forgot to take seasickness medicine at the time. She started to vomit after being beaten by the waves for a few minutes while watching whale sharks.

Can whale sharks bite people? Is this a dangerous activity?

Don't worry! Although the whale shark is the largest shark in the world, it is also the most docile shark! Whale sharks mainly feed on plankton, algae, and shrimps, so you don’t have to be afraid within the safe distance specified in the park. Take a picture with the whale shark generously!

The following are the prohibited items announced by the park. They are all for the protection of whale sharks and sea creatures. As a member of the earth, we hope that marine resources will continue to develop. Please be sure to abide by the rules of the park! Do not touch whale sharks, do not dive into the water, do not use flash when taking pictures, do not touch or kick corals, do not take anything from the sea, do not leave trash.

After watching the whale shark and change into your clothes, you can buy some souvenirs of the whale shark along the way, and the key ring is very cute. But remember that the weather is very hot, and you must always replenish water (there are also cheap coconut juices along the road) to prevent heatstroke and discomfort! The above is a day trip to Oslu Whale Shark Village. If you want to see this huge and cute animal up close, don't miss it when you come to Cebu! 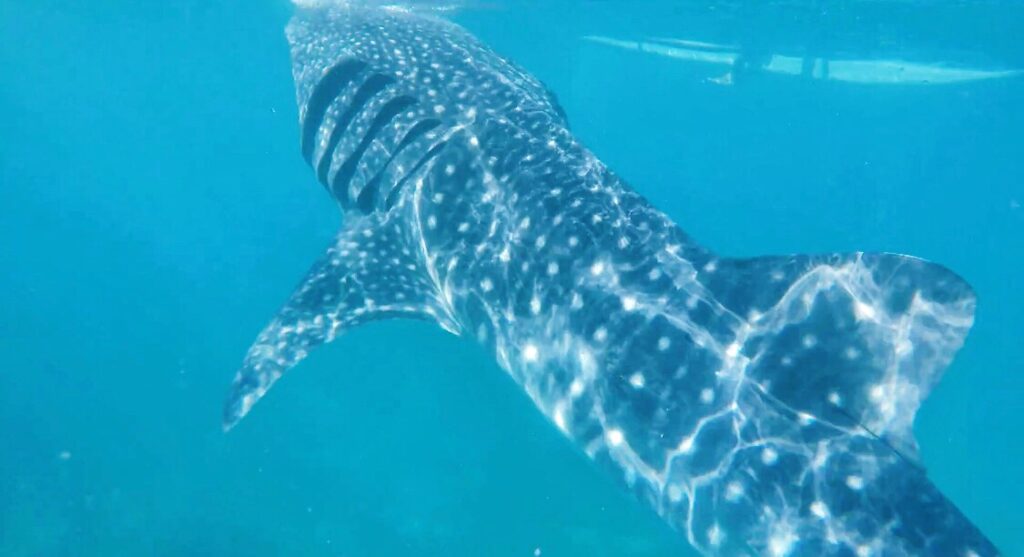 [Cebu Attractions] Oslu Whale Shark Village, a gentle creature that eats dried shrimps, turns out to be so close to whale sharks! 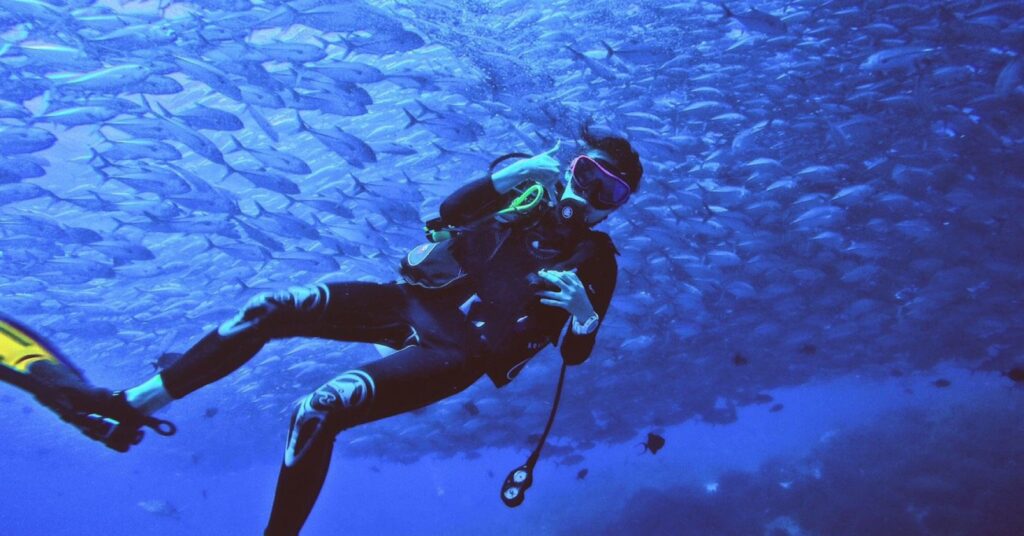 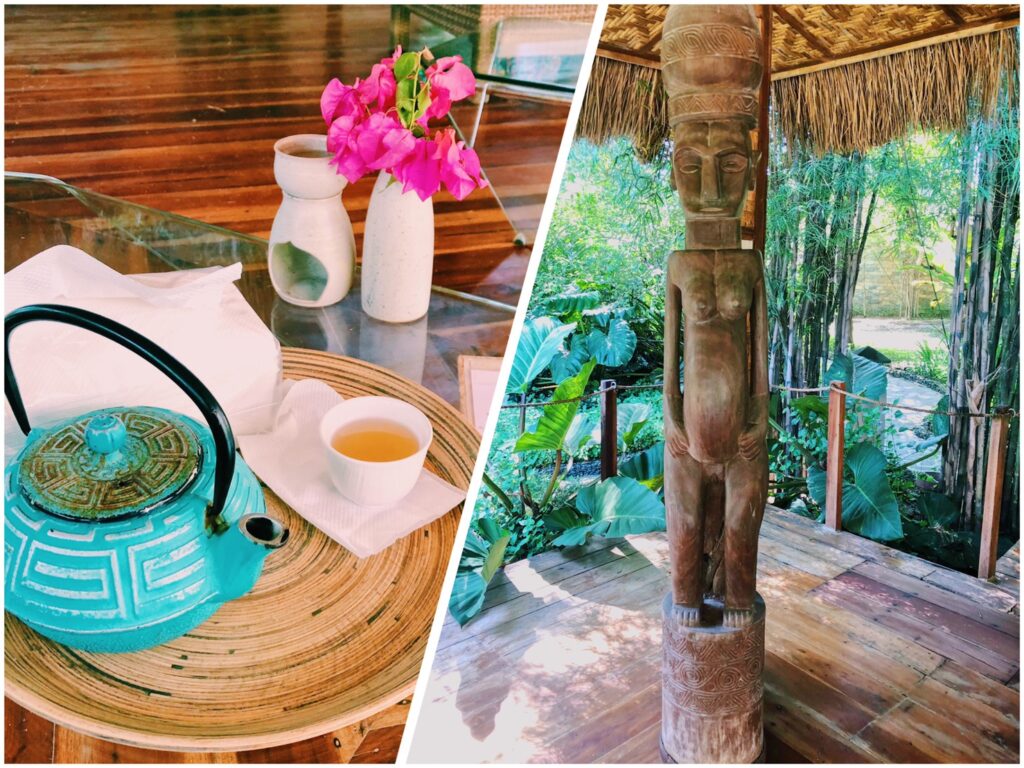 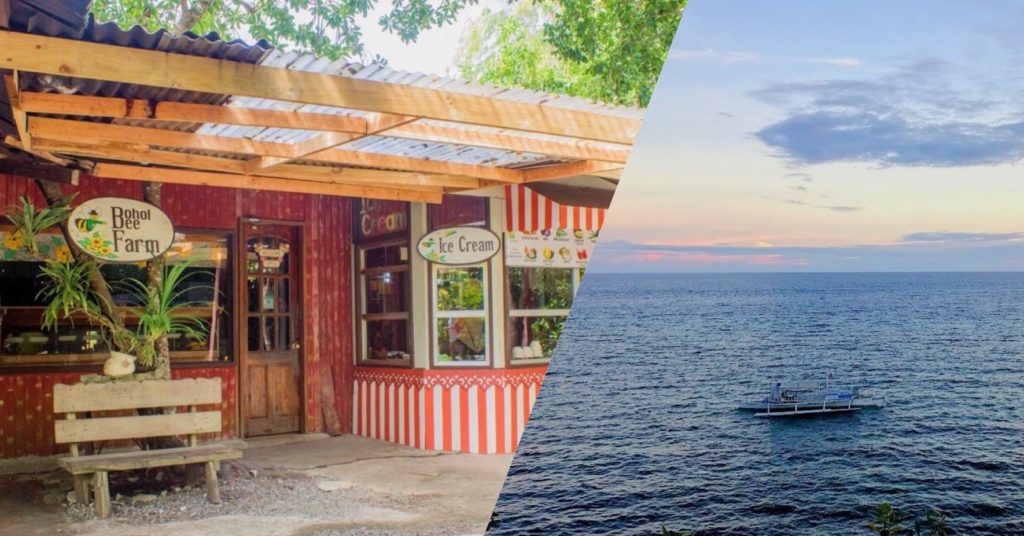 You should also want to read these articles!x